Akron is the seat of Summit county and the fifth-largest city in Ohio. As of the 2010 census, the population was 199,110. It is home to The University of Akron, the Goodyear Tire and Rubber Company, and the Akron RubberDucks, a minor league baseball team. Historically, Akron has been a very influential area. Sojourner Truth delivered her famous “Ain’t I a Woman” speech at the 1851 Women’s Convention, the rubber industry was virtually founded, and the Ohio and Erie Canal was created, linking Lake Erie to Akron.

Today, Akron is a center for innovation and invention. The Goodyear Polymer Center at The University of Akron focuses on research and development for many different polymer materials. Additionally, Newsweek ranked Akron fifth of ten high tech havens in 2001.

Only a short drive to Cleveland, Canton and Youngstown, Akron is centrally located for many different entertainment and educational activities.

Your support is appreciated! 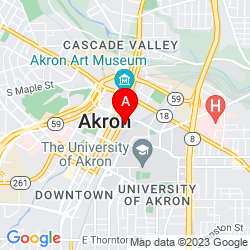